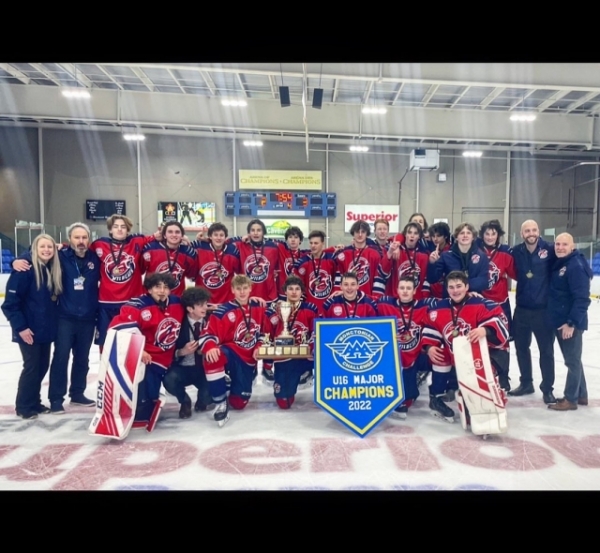 MONCTON, N.B. — Time seemed to be moving in slow motion as Ashton Samms waited to see if the puck would cross the goal-line.

“I saw it go through the five-hole, but it was slow, so I wasn’t sure at the beginning (if it was going in but then) I saw everyone jumping so I knew it went in,” he said.

The Nov. 20 goal gave the Valley Wildcats under-16 squad a 3-2 overtime win against the Basin Armada and made them the Monctonian AAA Challenge champs for the first time in the program’s history.

“It’s a really good feeling to know we won it over all the other teams,” the 15-year-old Yarmouth resident said of the historic victory. “I am glad that I was a part of it.”

“My teammate, Keegan Eisenhauser, skated hard to go get the puck in the corner and he passed it to me,” Samms recalled on Nov. 21. “I shot (the puck), but the goalie saved it. My other teammate, Matt Shields, went in for the rebound. The other team knocked it off his stick and it came back to me, and I shot it, and it went five-hole.”

Head coach Rob Smith said he was proud of his players.

“To get that victory, it truly means everything to these kids. They are going to be on Cloud 9 for the next few months here – not just weeks,” he said.

The victory will forever bond the players.

“I told these kids that there’s not many people that get to live that experience and for them … to be able to experience this, I truly believe that this will be with them for not only years to come, but for their lifetime,” Smith said.

The Wildcats didn’t take the easy route to the title at the prestigious tournament.

Valley dropped its opening game 3-2 to the Armada then rolled off four straight victories, including 3-2 overtime wins in the semifinal and final.

“Our coaches helped us stay positive,” said Samms, noting how crucial they have been to the team’s success.

Smith said the players beared down and found ways to win by working as a team and believing in each other.

“To get that first loss, we knew we had a lot of work to do to advance.”

A pair of wins to close out preliminary round play earned them a spot in the playoffs. Shields scored nine minutes into overtime to book a spot in the final of the 10-team tournament.

“That was an amazing experience in itself,” Smith said.

A look at the Valley Wildcats under-16 team’s results at the Monctonian AAA Challenge.

Head coach Rob Smith said: “To get the final result that the kids truly deserved, as a coach, there’s no better feeling. I wish I could describe it. It’s just pure happiness for these kids.”

It set up a rematch with the Armada, comprised of players from the Bedford-Halifax area, who are in first place in the 10-team Nova Scotia Under-16 AAA Hockey League. Valley is third with a 9-4-1 record after a couple of tough years.

“But having this victory just shows that regardless of the challenges that we face ahead, there’s nothing that really stands in our way,” Smith said.

The Wildcats return to league play Saturday, Nov. 26, at 3 p.m. when they host the Armada at the Mariners Centre in Yarmouth.

It will be Samms’ first game of the season in his hometown, and he can’t wait to play in front of family and friends.

“It’s going to be awesome because I don’t need to drive two hours for a home game; it’s only five minutes away,” he said. “This is my first time actually leaving my hometown to go play for a team and it was a good decision because it’s been a great year so far.”

The home base for the team, which is comprised of players from Windsor to Yarmouth and Shelburne, is the Kings Mutual Century Centre in Berwick.

“We have a huge catchment area,” Smith said. “It is a huge commitment from them and their parents, but they do it.”

Samms said the reason is simple.

“We love hockey and it’s the closest (AAA) team,” he said.

This is the sixth season for the league, which gives players another opportunity to play competitive AAA hockey if they don’t make an under-18 team while moving up from the under-15 level. In the past, some players wouldn’t get the chance to make the jump back to AAA after not making it in Year 1.

“It gives them another avenue to play and develop,” said Smith, who noted players have gone on to play major junior and junior A hockey after playing in the league. “It gives kids a second chance.”

Jason Malloy is the lead editor of the Annapolis Valley Register. He can be reached by email at jason.malloy@saltwire.com and followed on Twitter at @JasonMa47772994.